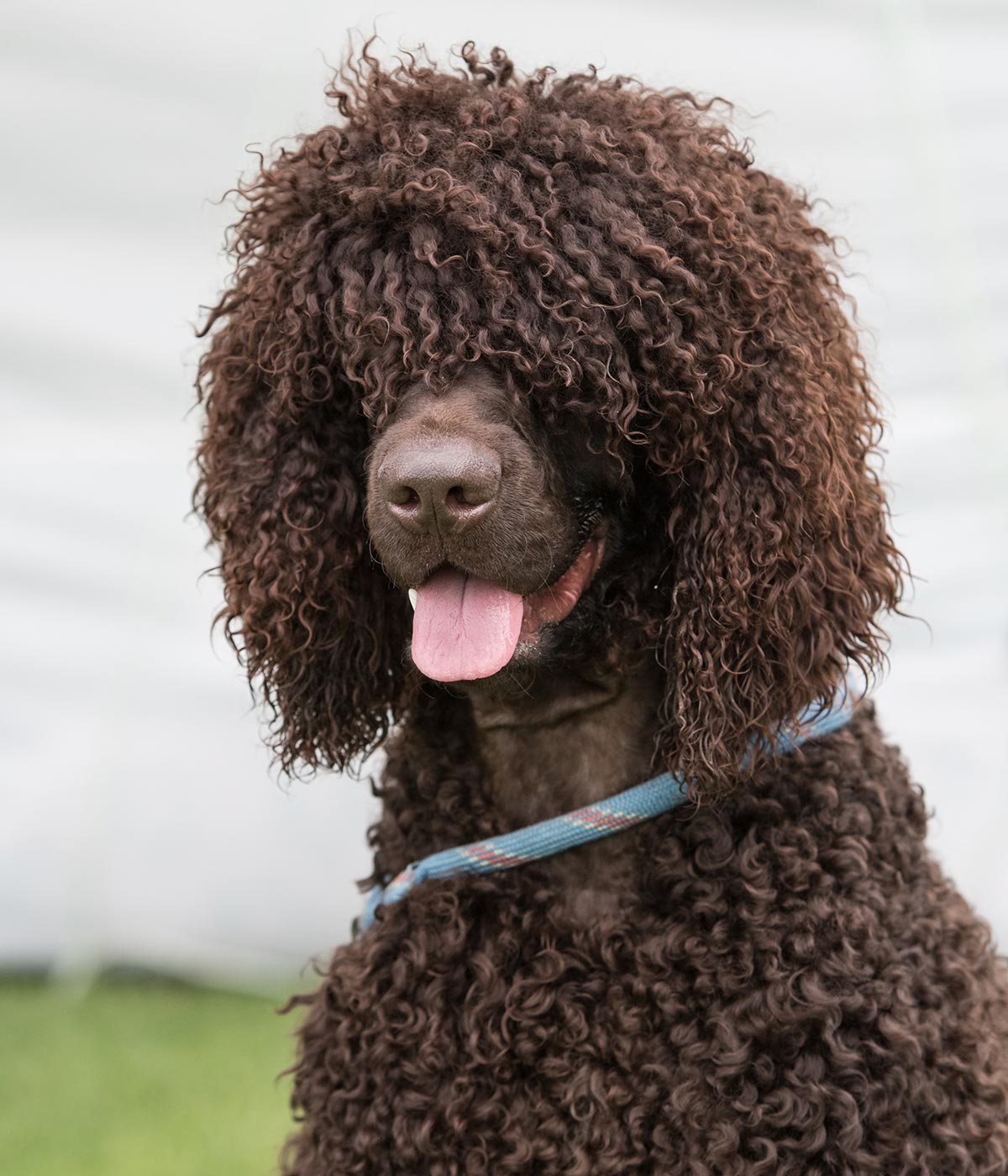 The breed's distinctive dense ringlet curls are a rich dark liver coloured coat. The males have a slightly heavier coat. The non-shedding characteristic of the coat means that people usually allergic to dogs might have less of an allergic reaction to Irish Water Spaniels.

The topknot of long, loose curls growing down from the head which often covers the eyes; low set, pendant ears; a beard growing at the back of the throat often accompanied by sideburns. The most distinguishing characteristic of these dogs is the smooth "rat tail", completely free of the long coat except at the base where it is covered for 2-3 inches with curls. The face is entirely smooth-coated.

The Irish Water Spaniel is a native Irish breed believed in Irish folklore to be the descendant of the Dobhar-chú. It is probable that more than one ancient breed of spaniel has gone into its makeup. It is not known from which other breeds Irish Water Spaniels were developed. The acknowledged father of the breed, Justin McCarthy from Dublin, left no breeding records. All manner of dogs have been suggested including the Poodle, Portuguese Water Dog, Barbet, generic old water dog, the now extinct English Water Spaniel as well as the Northern and Southern Water Spaniels, but whether Irish Water Spaniels are antecedents, descendants, or mixtures of these other breeds is a matter of some speculation. What is clear is that the breed has ancient roots. The modern breed as we know it was developed in Ireland in the 1830s.

Irish Water Spaniels are devoted companions but demand attention. They are boisterous and enjoy outdoor romping. Breeders recommend that owners start obedience training early. The breed can also be aloof with strangers.

Because it has been bred from stock used to fetch game and return it to hand without a fuss, it has the natural instinct of wanting to please. Its keen sense of working as a team makes it a relatively easy dog to train and discipline. Because of its great intelligence and quizzical nature, it has the reputation of being the clown of the spaniel family and will do ordinary things in extraordinary ways to achieve that which is asked of it.

Irish Water Spaniels need regular grooming, at least 30 minutes a week. The oil in the coat repels water but also attracts dust, and has the potential to create enormous matting problems. Loose hair is not shed by the breed so owners must spend time grooming. The hair around the ears, eyes, and toenails needs to be checked and trimmed regularly. Brushing may temporarily straighten the coat, but a spray of water or a swim quickly restores the natural curl. Many breeders recommend that pets be clipped, as it can be demanding to keep the animal in show condition.