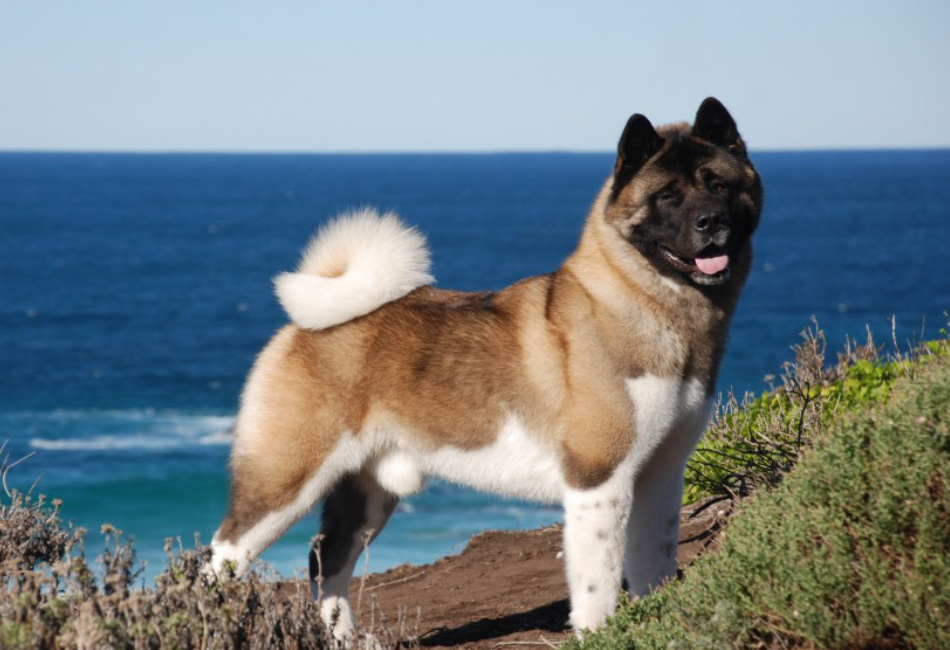 An Akita has a large head with a broad neck and chest. They have small eyes and erect ears. They are double-coated with the undercoat being very dense and plush which makes them suitable for the cold weather. They also excessively shed. The Akita comes in any colour except merle. Colours are brilliant and clear. Markings are well defined with or without mask or blaze. A pinto-coloured Akita has a white back with evenly placed patches that takes up one-third of their body. A white Akita does not have a mask. Their outer coat may have a different colour from their undercoat. An Akita’s tail is large, carried high and usually curled over their back.

Originally no large breeds existed in Japan. From 1603 in the Akita prefecture of Honshū, the medium-sized bear-hunting Akita Matagi dogs were used in dogfighting. From 1868, these dogs were crossed with Tosas and Mastiffs. As a result, their size increased but their Spitztype similarities were lost.

In 1931 the Japanese government designated the breed as a "natural monument". It was employed as a hunting and fighting dog and is now trained for police and guard work. During the first half of the 20th century, Akitas came on harder times. Some were used inhumanely for fighting, while during World War II, many others were killed for their coats. Luckily, the breed was saved by a few devoted people, who hid dogs in safety at their own personal risk. They remained, and remain, a true working breed.

Akita temperament is faithful and alert which makes it an admirable guard dog.

It is known to guard the members of its family faithfully and senses danger very fast. However, you should train your Akita to understand that not all situations are threatening. You should also make sure that your dog is used to routine day-to-day noise in the neighbourhood. Akita dogs are dominant and do not mix with other pets easily. In fact, most of them even act in a hostile way when in the presence of other dogs. This is especially true if you never properly socialized your Akita with other dogs at a young age.

It's therefore not a good idea to let your Akita run wild in the park among other dogs without proper supervision. This can lead to an altercation.

Akitas' plush, medium-length double coats don't really mat or tangle; though the breed sheds moderately (and heavily during the twiceyearly shedding season), aside from regular brushing, Akita grooming is not a time-consuming process. These dogs require brushing once or twice per week. Breed experts strongly recommend not shaving an Akita.