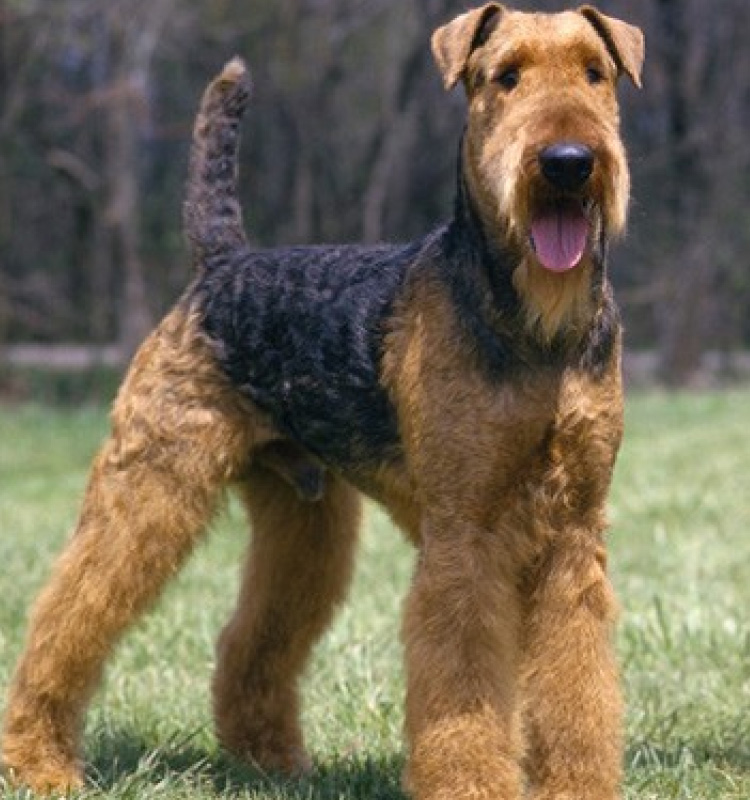 The Airedale Terrier is the largest of the terriers and stands square in appearance. The double coat has a hard, dense, and wiry outer coat with a soft undercoat. Coat colours include tan and black and tan and grizzle. The head and ears should be tan, with the ears being a slightly darker shade of tan. The legs, thighs, elbows, and the under part of the body and chest are also tan, sometimes running into the shoulder. In some lines, there is a small white blaze on the chest. The back of the dog, sides, and upper parts of the body should be black or dark grizzle in colour.

They were developed about a hundred years ago in the country of York from the ancient Working Terrier. The Airedale is often called "The King of Terriers." The breed was used as a vermin hunter and was named for the Valley of the Aire in England, which was heavily populated with small game. In addition to his role as a small game hunter, the Airedale has been used to hunt big games in India, Africa, and Canada. The breed was also used as a police dog and a wartime guard in World War II. Today the Airedale is primarily a companion dog, but there are still working lines out there. Some of the Airedale's talents are guarding, watchdog, hunting, rodent control, tracking, military work, police work, and competitive obedience.

Courageous and protective. Fairly friendly with strangers. Intelligent, pleasant, and loyal. Sensitive and responsive, he can be obedience trained at a high level. Airedale Terriers are fun-loving and playful when they are puppies. Airedales will be happy to please you.

Airedales were bred for active work, and therefore need plenty of exercises. They need to be taken for long daily walks. Most of them love to play with a ball, swim, or retrieve objects and once fully grown will happily run alongside a bicycle. Without enough attention and exercise, the Airedale Terrier will become restless and bored and will usually get itself into trouble. Airedales have a hard, short-haired, double coat. The hair should be plucked about twice a year, but for dogs that are to be shown, much more intensive grooming is needed. Trim excessive hair between the pads of the feet when necessary. If you keep the coat stripped it will shed little to no hair. Airedale Terriers can be good for some allergy sufferers.